For decades, the struggle for West Papuan independence has been fought from the vast rainforests along the border between Indonesia and Papua New Guinea (PNG). But there has been little progress, and now second generation refugees from the Indonesia portion of the island of New Guinea — which they term West Papua — are discarding the guerilla tactics of their parents in favor of international networking and information efforts.

From Kiunga in PNG’s Western Province, Indonesia is just around the corner. The border itself is formed by the Fly River, named after the first European vessel to reach this gridlocked part of the world in 1842. Today, the river transports gold and copper from the Ok Tedi mine, north of Kiunga.

Along the road to Ok Tedi, paid for and constructed by the mining company, a pipeline transports minerals from the jungle to the wharf in Kiunga, from where it is shipped to satisfy the global market’s ever-increasing demand for gold and copper.

Kiunga’s 30,000 inhabitants are from all over PNG. Here everything is surprisingly expensive; most of the food, drinking water and electronics are imported by plane, forcing prices sky-high. This is evident at the local market; locals pay US$3 for a tin can of fish, a tiny fish from the Fly River is yours for $8. You can have a banana for $2.

Sustainable? Not really, if you ask the people living here.

Since the mid-1980s, around 15,000 refugees from Indonesian Papua have found themselves stranded in and around Kiunga — either in border camps or “settlements”.

They fled the low but intense war that followed after what was called West Papua was integrated with Indonesia in 1969. That population was not allowed to participate in a UN-backed referendum regarding independence or integration; instead, a little more than a thousand male elders hand-picked by the Soeharto government got to decide the future for West Papua’s then half a million inhabitants. Two years prior to those controversial elections, Jakarta had signed a contract with US mining giant Freeport, granting the company a 30-year-long concession in Papua.

Life in the border camps is one of hardship. In Dome, home to about 95 families and located 25 kilometers from the Indonesian border, the main source of protein has been lost since the pollution of the Fly River left the fish unfit to eat. Citizens of PNG have received financial compensation for the environmental havoc caused by Ok Tedi, but due to their legal status the refugees are ineligible. “Many years ago, before the pollution destroyed the river, the water was clear,” explains a Papuan couple arranging motorboat transport across the Ok Tedi River.

The vast majority of land in Papua New Guinea is privately owned, and the refugees are left with little choice but to occupy. The situation does cause tension, and local landowners will sporadically voice their discontent through violence. “Last year they burned our school to the ground,” says Johnny Mathias, a 30-year-old Dome resident and father of two. “We contacted the police but they don’t really do anything.”  To an extent, the difficulties that Dome faces are the result of an active choice. The refugees here have made the decision not to apply for permissive residency. “If we do so, there’s a risk that we will forget why we are here, which is to fight for the freedom of West Papua,” says Panus Keileum, one of the village elders.

Likewise, the location of Dome, in the remote rainforest of the Western Province and plagued by malaria and waterborne diseases, is also a choice. “If we move away from the border no one will talk about our cause, we will become a part of PNG. Instead, we chose to stay here and encourage the young generation to carry on fighting.”

“I think we all received the will to fight from our parents,” says Anna Yawa, a 21-year-old teacher and youth leader at the Waterfront refugee camp in Kiunga. “It is in our blood, we came to this country to achieve freedom.” However, while the incentive to continue the struggle for independence is strong with Anna and her peers, they might not adhere to all the advice offered by their elders — for good reason.  Decades of skirmishes along the border, during which rebels of Organisasi Papua Merdeka (OPM) have attempted to confront the Indonesian military using bows and arrows, have not advanced the cause. Instead, the movement has been severely crippled by internal power struggles.

“Sometimes it seems like we are fighting two battles; one for independence and one for the leadership of the movement. We, the young generation, want collectivity and one uniting idea,” says Andreas Hanueby, 23, from the Waterfront camp. A university student of linguistics and anthropology, he is part of a student organization that attempts to promote the concept of independence on campus.

is discarding guerilla tactics in favor of networking and information efforts. “In the 1960s and 1970s the resistance struggle was carried out in the jungle, but no one knew about it. That’s why we need to get international attention. Our aim is to get the United Nations to debate the issue,” says Steven Dude, 29, also from Waterfront. Steven works for the Catholic Mission, established by The Vatican in the 1950s, and which provides or pays for most of the health and education services that refugees have access to.

Refugees face several obstacles in PNG. Their freedom of movement is restricted and they say they are discriminated against in the labor market. While the older generation has not addressed these issues due to the belief that it will defer attention from the cause of independence, younger refugees are committed not only to that cause but also to improving their present situation. “This is our home away from home. We cannot only live in the future,” says Andreas.

Even though access to education is still a problem in remote camps, second generation refugees have had greater opportunities to inform themselves than many of their parents, which has brought about a more refined political analysis. “Some of our parents say that we are victims of the Cold War. That the US sold us to Indonesia in exchange for calm in the Pacific Ocean,” says Steven.

“But the main reasons were economic,” adds Andreas. “At the core of the issue are the natural resources and the money that Freeport’s mining operations generate.” Putting the West Papuan issue in a broader context encompassing global capitalism, rather then viewing it as an isolated conflict, also entails a new view of Indonesia.

While crimes against civilians perpetrated by the Indonesian military will not soon be forgotten, the younger generation recognizes the politics of power can’t be blamed on the general population. Steven says: “Before World War II you had colonialism, now the economy is used to control developing countries. Papua New Guinea is one of them, and so is Indonesia.”

But, adds Andreas, “Our goal remains the same: an independent West Papua.”

Andreas Hanueby and Steven Dude (above).

IVAR ANDERSEN is a Swedish journalist and writer.

KLAS LUNDSTRÖM is a Swedish journalist and writer. 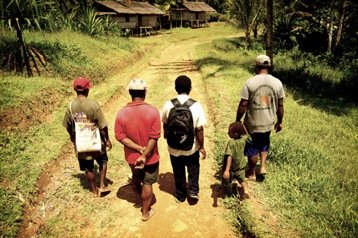 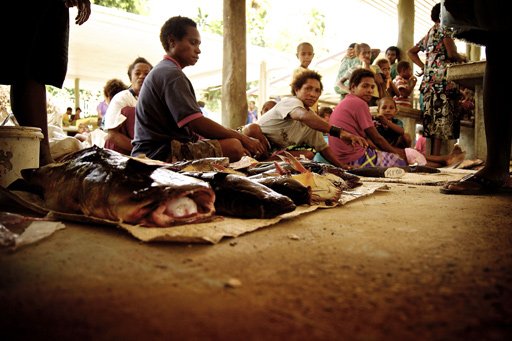 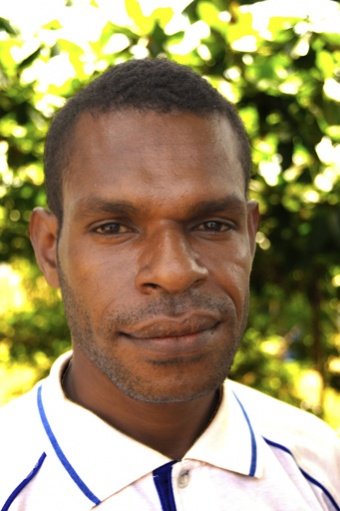 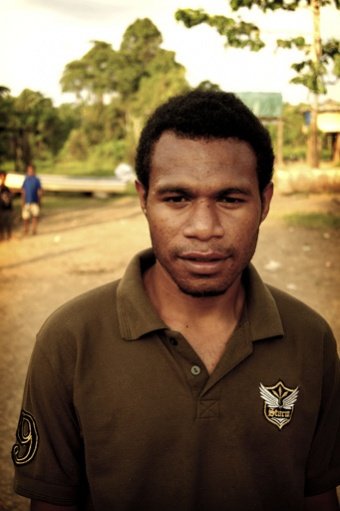