At the café at the train station in Yogyakarta, a man in his late 20s pulls up his left shirtsleeve. A cool breeze from a fan hits the fresh tattoo. One or two café guests cast quick, nervous glances at the man’s arm while he thanks someone else for the kind words regarding his latest acquisition — a tattoo encircled by a dark, explicit background.

Why did he get the tattoo? »I love tattoos,« the man says.

Twenty years ago, this sight would more or less have been impossible in Indonesia. A person with a publicly displayed tattoo would most likely have faced severe reprisals — despite the fact that the country includes many cultures with body decoration traditions, including tattoos.

Tattoos for a long time — in people’s and politician’s eyes — were equivalent to crime and danger. And, art in Indonesia during the Soeharto era, as in other Asian countries such as the Philippines, Singapore and Thailand during the 1970’s and 1980’s, was a political minefield where artists ran the risk of being labeled dissidents, communists or threats to the nation.

The tattoo made its comeback from the cold in Indonesia thanks to the owner of a tattoo parlor in Yogyakarta: a man named Athonk. In the underground scene, Athonk is still considered a shining star who used the tattoo needle as a tool to bring back tribal symbolism from the dead — back into a growing sphere in the »Southeast Asian Tiger’s« cultural life.

One of Athonk’s contributions to the cultural perestroika came the year before Soeharto’s resignation, in 1997, when the country’s first ever organized tattoo festival was held in Yogyakarta.

It is said that the Mentawai people, living on islands off the west coast of Sumatra, contains the oldest proof of a tattoo culture, and the Dayak people of Borneo have long used the body decoration of tattoos.

Social anthropologist Laine Berman wrote: »In Java, any research related to the art of tattoo must keep in mind the fact that tattoos in many ways form the socioeconomic border line between rich and poor.«

Both sides, Berman continues, have adopted the tattoo, but for entirely different reasons, and had them made under completely different circumstances.

The difference can be illustrated by the varied motifs, the person’s reason for wanting a tattoo, and if they get it done by a friend in a domestic environment, in a nice tattoo parlor with sterile equipment or on a street corner with handmade equipment and fatal health risks.

Heroin addicts have used tattoo art while trying to defeat their drug addiction.

Tattoos, and some motifs, are believed to contain spiritual forces and offer close contact to God or the gods — therefore tattoos have always been used as talismans to protect their bearers from evil spirits.

Isolated civilizations in Borneo and Sumatra suffered in the wake of the arrival of Europeans and imperialism — in order to appease their new gods, Dayak women had their earlobes cut off, and mighty tribesmen had their tattoos removed by clearing their tattooed skin.

In the 1980’s, when the Indonesian economy was in turmoil, »tattooed criminals« became a lethal political expression. In newspapers one could read about people being killed, simply labeled as »tattooed«, without any further information.

»People wearing tattoos, voluntarily started to hand themselves in to the police, simply to avoid being killed in the streets,« James Siegel writes in A New Criminal Type in Jakarta: Counter-Revolution Today. The killed »tattooed people” were often left on the road as a warning sign to the public.

Artists remain traumatized by the way they were treated during the Soeharto regime, says one of the writings in Awas!, a collection of essays about the modern Indonesian art scene.

Censorship has taken its toll; artists continue to self-censor, which in the long run affects the entire country’s cultural scene.

In every democracy, its cultural state of mind tells you how people really feel.

According to Berman, in a society where people for a long time had to live with their eyes closed, they tend to avoid cultural expressions that challenge middle-class lifestyles and non-urban social alternatives. Berman talks about a monoculture on the artistic front that for many years seemed to eclipse Indonesia.

However, the sight of the young displaying their tattoos in public strongly indicates that there are more colors than black and white present in modern-day Indonesia.

Today, tattoos seem to be a growing part of society. Tattoo parlors can be seen in most of the bigger cities on Java and Bali, and Indonesian artists often display their works at international tattoo festivals.

Walking inside a mall, you often pass the unmistakable sound of a tattoo needle catching up its speed, followed by the nervous look of a person who is about to decorate, permanently, a part of his or her body in a modern way from what has always been an integral part of the cultural life in Southeast Asia’s fastest growing economy.

»Are you ready?« the tattoo artist asks his client. The client answers with a quiet nod. Everything seems to stand still for a moment, as if the whole world has hit the pause button, but shortly after, everything’s back to what it was.

Although these mobile tattoo parlors are often found under an escalator or in the corner near the public restrooms next to the food court, most people choose to look on the bright side. Nowadays, at least they’re inside the malls, integrated in the range of commercial alternatives, a growing part of the community.

Worldwide, some still consider tattoos a symbol of crime, theft and danger — but in Indonesia, where the oldest tattoos have been traced back to the Iron Age, 10,000 years ago, it has made a remarkable comeback since the turn of the century.

Can the increasing numbers of tattoos, particularly among youth, tell us something about the condition of the country’s democracy?

Is a recent tattooed arm in a café in Yogyakarta a sign?

According to some, it is. »Soon enough«, a young man in Jakarta says, »you’ll hopefully be able to apply for any type of job without feeling ashamed of your tattoos.«

On his neck, a tattoo influenced by Javanese batik culture breaths under the hot Jakarta sun. Some day, he adds.

The essay was first published in The Jakarta Post 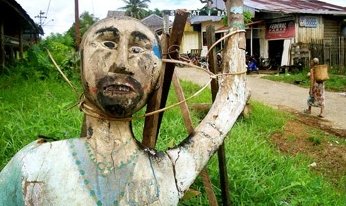