October 7 is the annual date of the death of the Russian writer and investigative journalist, Anna Politkovskaya. It was a miserable and shameful deed in 2006, which forever silenced a brave voice that is badly needed in today's Russia–and in the rest of the world, as well.

Politkovskaya’s journalism not only highlighted delicate issues that post-Communist Russia wanted to remain hidden in the dark; first as an investigative reporter under the regime of President Boris Yeltsin, and then, especially, during his successor, Vladimir Putin.

The uncensored fragments of reality–in the essays, reports and books of Politkovskaya–told us about a horrific genocide in Chechnya, abuse of power in Kremlin, military corruption and what life was like in forgotten corners of the world’s biggest country.

In her astonishing collection of reportage, »Putin's Russia«, Politkovskaya traveled to Kamchatka Peninsula in the far-eastern corner of the country, where the Pacific Fleet is based. There, she spoke to army people whom in Putin’s Russia had succumbed to a life of despair, poverty, and contempt. Like few other journalists in modern times, Politkovskaya thrust down to the bottom of the seas of enlightened societies to listen to marginalized voices.

That was the reason Anna Politkovskaya was poisoned on a flight to Chechnya; that was the reason she lived in constant fear of her life, surrounded by numerous death threats and maligned in main-stream Russian media, faithful to Putin’s regime.

She did, however, what few of us would have done in the same situation; she continued to work, to travel, and to listen. In an interview a few years before her death, she said:

»If I don’t talk and write about women’s experiences from the war in Chechnya, who will?«

She was right. Since the murder of Politkovskaya in 2006, the numbers of reports from the forgotten corner of Russia’s longest war since the collapse of the Soviet Union has declined; and no longer have the same impact.

Anna Politkovskaya’s integrity and professionalism made it impossible not to listen to what she had to say. And one can only wonder what Politkovskaya would have said about Russia’s continuing political decay under the ever-watching eye of President Putin. What insight would she give us regarding Russia’s shameful L.G.B.T. laws, about the expulsion of families as a part of the urban facelift for the upcoming Winter Olympics in 2014, in Sotji? I wonder if she would laugh or cry if she’d find out that President Putin, in fact, has been nominated for the Nobel Peace Prize this year.

Rest in peace, Anna Politkovskaya; now it’s time for us to pick up your fallen mantle and continue to listen to the far cries from the bottom of silenced seas.

The essay was first published in Bakwa Magazine 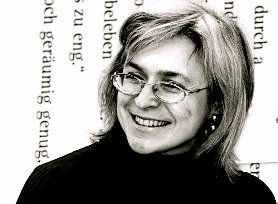